Because of R’s strong desire to remain in her home of over 65 years and live independently, alone–she may have put more thought into cane selection than many. 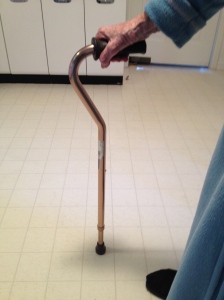 The cane she eventually purchased, she first used in rehab. While she used many canes in rehab, this one felt best to her, because of its handle, which is broad. Her palm rests on it, instead of fingers wrapping the usual more rounded handle. Thus, it felt like added support.

To backtrack a bit–

Shortly before her release from rehab a cane salesman visited her in her room. (Don’t know if this is true of most rehab centers.) I happened to be there.

He brought a good supply of canes, but none with the handle R swears by for stability and confidence. She told him what she wanted, which he didn’t have. (No one said she had to purchase his canes…I think it was a “service.”)

The day she signed out of rehab 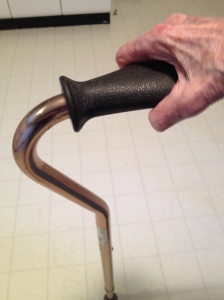 , they let her borrow the cane she liked  best. She took it to the surgical supply store. Not a stock item, It needed to be ordered and would take 2 weeks. R. was eager to get started with it. My husband ordered it through Amazon, where itt was less expensive and arrived at R’s home in 3 days. I can’t remember if Medicare covered it.

A year or so later R saw and ordered the HurryCane. One of its attributes–advertised on TV– was that it stood up by itself. R’s home is carpeted. It did not stand up on carpet. She phoned the company and spoke to “a very nice man” who said she could return it and get full credit (which she did). Although that cane didn’t work for her, she appreciated the ease of return.

She then tried a little rubber gadget that would attach to the bottom of her cane so it would stand up by itself.  But first the existing rubber tip needed to be removed. The rubber gadget didn’t work and R says the original tip could not be put back on her cane–necessitating another purchase of the original cane –with the broad handle.

When R bought the replacement cane, she went back to her rehab place to have them fit the cane so the handle was at the proper height for her. She was told when she left rehab 4 years ago how important it is that the cane is fit properly by someone knowledgeable. She’s convinced that’s why some people who, don’t stand up straight and walk properly with their cane, have problems.

R has always been creative in solving her problems. That’s undoubtedly one reason she has been able to remain independent for so long. Currently her walker, which she loves, provides a place to rest her cane in the standing position.  It’s sort of hooked to one side (see photo). It stands up and ready–always in the kitchen. And when she’s walking to other parts of her one-story home, she can lay the cane on a bed, chair, etc. where it’s easily accessible. 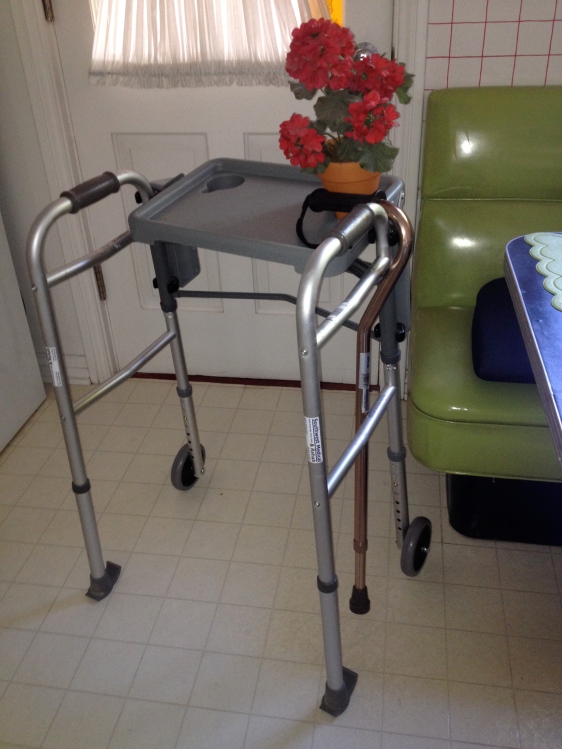 As parents age, inevitable problems arise. Loss of almost all vision in R’s left eye and macular degeneration in her other eye are her current concerns. Mobility isn’t one of them thanks to her cane and a walker (next post).