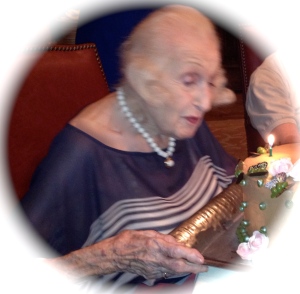 Sr. Advisor R has been called “amazing” for years by so many 40-60-year-olds, who also call her “terrific” and “timeless.” Past posts have underscored their respect for her wisdom and admiration for her ways of handling things. She’s both an advisor to this bog, and my m-i-l. And currently she is facing another challenge: a big round spot blocking vision in one eye–macular degeneration.

During 100 years of living she has overcome much–the last big hurdle: her impressive recovery from a broken hip (femur) at 97. That was three years ago. Her mind remains excellent for her age and she was aware her sight was suffering “a little” degeneration, but was getting no professional treatment and hadn’t noticed that her sight was changing until it suddenly began over several days.

Coincidently she had an opthalmologist appointment scheduled a few days later. While she began immediate treatment, the prognosis from two ophthalmologists is that results will be slow and no doubt limited. With her vision impacted and depth perception a real problem she is making adjustments.

“We take eyesight for granted–don’t realize how important it is–it’s your connection to the world,” says R, who adds “I’ll do the best I can with it.” With one “weak but useable” eye, she is using two magnifying glasses of different magnifications to finish doing her income taxes (making itemized lists) for the accountant next week. Everything takes much more time now, and planning how long something will take is “ify,” especially getting ready to go some place.

R acknowledges that when facing serious challenges in the past, she had to let go of some things and prioritize others in order to redirect her energy towards maintaining independence. This is the last year she will do her taxes. Which brings us to yesterday.

R continues with her life, albeit at a slower pace because vision problems affect simple things like putting on make-up and doing her hair. Yesterday she needed to go to the bank.  My husband or I could have done that errand for her but she didn’t want to give in to that.

She requested I pick her up more than an hour later than the usual time. The young woman who usually helps at the bank, J, was away when we arrived. She later heard R was there and appeared as R was finishing her business. “I haven’t seen you in months and I was worried,” was J’s greeting. Then ensued a conversation about R’s eye situation and being 100 and how much she admires R.

J then told what I believe to be a true story about a friend’s grandfather. We seem to like to talk about amazing older people who still make the effort.  At age 103, he still works out at the gym 4 days a week. Evidently one of the trainers told him that perhaps he should cut down the number of workouts–or at least shorten them. To which the grandfather asked: “How old are you?” Response: “30 something.” “I’m 103,” said the grandfather.

Whereupon a thought entered my mind: When older people are doing great and still have a good mind, why do younger people feel a need to give them advice? I know R doesn’t believe in what she calls “unsolicited advice.”

We hear more and more about people living into old, old age. No doubt all have some aging problems. The ones who “soldier through,” who make the effort, are the amazing ones. They have been called “The Greatest Generation.” I wonder if we will do as well.

R has often said “I’m a realist.” Yet I’ve never heard her say anything like “Growing old is not for sissies.” Instead she will be the first to tell you getting old “isn’t easy,” explaining “it takes willpower, energy, and common sense–more every year.” She has been widowed half of her life, thinks deeply and shares knowledge of a lifetime when appropriate. Her younger friends say she has taught them so much about living. It has cemented a special bond.

If that doesn’t provide the bedrock for quality of life and a reason for making the effort, I don’t know what does.

Related:
In sidebar– 12/11/13 Mayo Clinic’s Age-Related Vision Problems and How the Eye Perceives Them

3/26/14 Help! Aging Parents has been nominated for 2014 “Best Blogs by Individuals” recognition and we would appreciate your vote by 4/28 if you’re on Facebook. We were honored to be judged part of a 3-way tie for first runner-up last year thanks to your votes which took us to the judging round. Click top badge at right to view a universe of helpful aging blogs and resources, even if you can’t vote on Facebook.