When Aging Parents Move and We Try to Help–Telephones! 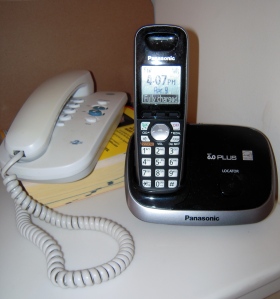 Will Our Telephone # Move Too?

Unlike cell numbers, hard-wired telephone numbers don’t necessarily follow to a new residence–even when it’s not far from the previous residence. For aging parents, telephone numbers need to follow from the “get-go.” Obvious? Perhaps. Under stressful conditions–perhaps not.Unintended consequences, are just that. We don’t think about them until we’re left with the damage control. And if we’re responsible as we try to help aging parents, it’s easy to become angry with ourselves for creating additional problems that disappoint parents and can unnecessarily involve siblings.

An 85-year-old relative recently moved from her condo to assisted living–not a move she initiated. Several months of worsening mobility problems and a series of hospitalizations jeopardized living alone.

The last several years she and her 3 grown children had discussed the wisdom of moving. Friends in her condo complex had died or moved. And there was an attractive independent-living place nearby, making it easy to maintain her routines.

My relative is smart, organized, active, loved her condo of 40+ years and hung on to her independence–through many serious health events.  But last month her doctors advised she needed assisted–not independent–living. She gave in and asked her children to arrange for the move while she recovered in a hospital.

What’s a telephone got to do with it?

To reiterate from past posts, connections to others is one of the 3 most important factors in healthy aging. And telephones provide a major way of connecting with others. Indeed older people may have their friends’ numbers on automatic dial as memories fade.

My relative’s caring, efficient children notified the phone company to close her account immediately.  It was an easy thing to cross off a long list. But suddenly they realized friends couldn’t contact her.  She had a completely new phone number at the assisted-living facility, which used another provider.

Think about new phone numbers being a problem for aging parents and grandparents who downsize (and for their aging/old friends).  If they remain in the same area of their city/town and stay with the same phone company it’s more likely that the phone number won’t change. Simply tell the phone company that although the address is changing, your parents want to keep the same #.

1.  However, do not notify the phone company to stop an aging/old parent’s existing phone service before asking if they can transfer the old telephone number to the new address. Otherwise the existing phone number can be given away.

2.  Check out–ahead– the phone system/provider at the new place. When an institution has its own system or a different phone provider, it may be best to ask the person in charge to take care of having your parents’ old phone number transferred immediately if it’s doable. This eliminates having aging parents in a new living situation feel even more isolated because friends can’t phone them.

My relative’s children report it was a hassle to get the old phone number back–took 3 weeks to accomplish.  “We were just lucky,” they added.  (It may not be this difficult everywhere.)

It was simpler back in the day, when “Reach out and touch someone” was part of a well-known telephone ad; when accessing a live human being on the other end of a business’s line was the norm. Never-the-less we can prevent unintended consequences and, in the case of telephones, maintain that connectedness so important for older people’s aging well. It doesn’t take too much effort…when we have a “heads up.” Otherwise, it pays (to use an old Revlon nail polish ad) to “Make haste slowly.”